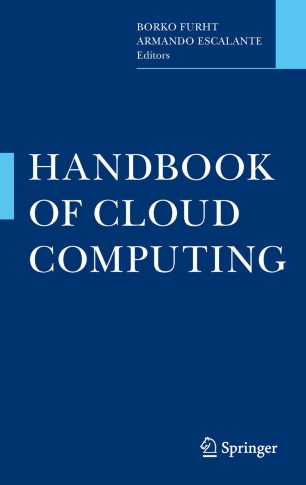 Topics covered include, among others:

• Data-Intensive Supercomputer in the Cloud

• Scientific Services and Data Management in the Cloud

Handbook of Cloud Computing is intended for advanced-level students and researchers in computer science and electrical engineering as a reference book. This handbook is also beneficial to computer and system infrastructure designers, developers, business managers, entrepreneurs and investors within the cloud computing related industry.

Borko Furht is a professor and chairman of the Department of Computer & Electrical Engineering and Computer Science at Florida Atlantic University (FAU) in Boca Raton, Florida. Professor Furht received his Ph.D. in electrical and computer engineering from the University of Belgrade. His current research is in multimedia systems, video coding and compression, 3D video and image systems, video databases, wireless multimedia, and Internet computing. He is a founder and editor-in-chief of the Journal of Multimedia Tools and Applications (Springer). He has received several technical and publishing awards, and has consulted for many high-tech companies including IBM, Hewlett-Packard, Xerox, General Electric, JPL, NASA, Honeywell, and RCA, and has been an expert witness for Cisco and Qualcomm. He has given many invited talks, keynote lectures, seminars, and tutorials, and served on the Board of Directors of several high-tech companies.

Armando J. Escalante is SVP & Chief Technology Officer of Risk Solutions for the LexisNexis Group, a division of Reed Elsevier. In this position, Escalante is responsible for technology development, information systems and operations. Previously, Escalante was Chief Operating Officer for Seisint, a privately owned, Boca based company, which was purchased by LexisNexis in 2004. In this position, he was responsible for Technology, Development and Operations. Prior to 2001, Escalante served as Vice President of Engineering and Operations for Diveo Broadband Networks where he led world class Data Centers located in the U.S. and Latin America. Before Diveo Broadband Networks, Escalante was VP for one of the fastest growing divisions of Vignette Corporation, an eBusiness software leader. Escalante earned his bachelor’s degree in electronic engineering at the USB in Caracas, Venezuela and a master’s degree in computer science from Steven Institute of Technology as well as a master’s in business administration from West Coast University.

“Cloud computing affects all areas where computers and mobile clients are used, including industry, government, and science. This book offers a multitude of examples of this new way of handling data and computer resources--from basic research in the life sciences and physics to enterprise-level applications in industry. … handbook is highly relevant and provides the reader with good information about the fundamentals of all aspects of cloud computing. After reading the book, readers will understand how much is already being done in the cloud.” (Aake Edlund, ACM Computing Reviews, May, 2011)