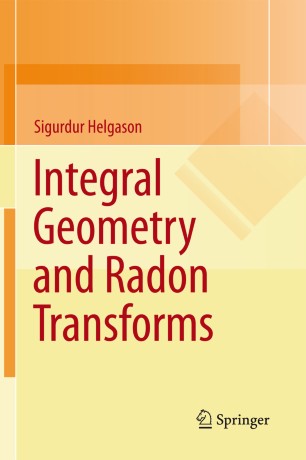 In this text, integral geometry deals with Radon’s problem of representing a function on a manifold in terms of its integrals over certain submanifolds—hence the term the Radon transform. Examples and far-reaching generalizations lead to fundamental problems such as: (i) injectivity, (ii) inversion formulas, (iii) support questions, (iv) applications (e.g., to tomography, partial differential equations and group representations). For the case of the plane, the inversion theorem and the support theorem have had major applications in medicine through tomography and CAT scanning. While containing some recent research, the book is aimed at beginning graduate students for classroom use or self-study. A number of exercises point to further results with documentation. From the reviews: “Integral Geometry is a fascinating area, where numerous branches of mathematics meet together. The contents of the book is concentrated around the duality and double fibration, which is realized through the masterful treatment of a variety of examples. The book is written by an expert, who has made fundamental contributions to the area.” —Boris Rubin, Louisiana State University