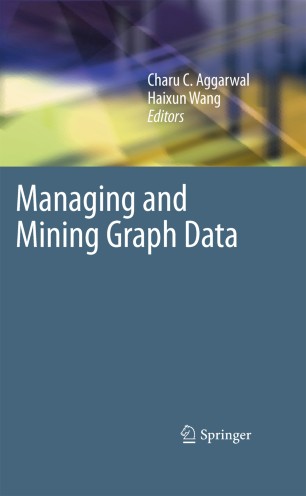 Managing and Mining Graph Data is a comprehensive survey book in graph data analytics. It contains extensive surveys on important graph topics such as graph languages, indexing, clustering, data generation, pattern mining, classification, keyword search, pattern matching, and privacy. It also studies a number of domain-specific scenarios such as stream mining, web graphs, social networks, chemical and biological data. The chapters are written by leading researchers, and provide a broad perspective of the area. This is the first comprehensive survey book in the emerging topic of graph data processing.

Managing and Mining Graph Data is designed for a varied audience composed of professors, researchers and practitioners in industry. This volume is also suitable as a reference book for advanced-level database students in computer science.

Charu C. Aggarwal obtained his B.Tech in Computer Science from IIT Kanpur in 1993 and Ph.D. from MIT in 1996. He has worked as a researcher at IBM since then, and has published over 130 papers in major data mining conferences and journals. He has applied for or been granted over 70 US and International patents, and has thrice been designated a Master Inventor at IBM. He has received an IBM Corporate award for his work on data stream analytics, and an IBM Outstanding Innovation Award for his work on privacy technology. He has served on the executive committees of most major data mining conferences. He has served as an associate editor of the IEEE TKDE, as an associate editor of the ACM SIGKDD Explorations, and as an action editor of the DMKD Journal. He is a fellow of the IEEE, and a life-member of the ACM.

Haixun Wang is currently a researcher at Microsoft Research Asia. He received the B.S. and the M.S. degree, both in computer science, from Shanghai Jiao Tong University in 1994 and 1996. He received the Ph.D. degree in computer science from the University of California, Los Angeles in 2000. He subsequently worked as a researcher at IBM until 2009. His main research interest is database language and systems, data mining, and information retrieval. He has published more than 100 research papers in referred international journals and conference proceedings. He serves as an associate editor of the IEEE TKDE, and has served as a reviewer and program committee member of leading database conferences and journals.