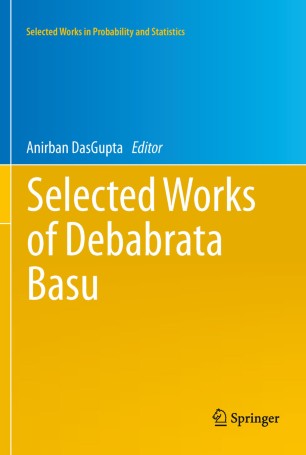 This book contains a little more than 20 of Debabrata Basu's  most significant articles and writings. Debabrata Basu is internationally  known for his highly influential and fundamental contributions  to the foundations of statistics, survey sampling, sufficiency,  and invariance. The major theorem bearing his name has had numerous  applications to statistics and probability. The articles in this volume  are reprints of the original articles, in a chronological order. The  book also contains eleven commentaries written by some of the most  distinguished scholars in the area of foundations and statistical  inference. These commentaries are by George Casella and V. Gopal,  Phil Dawid, Tom DiCiccio and Alastair Young, Malay Ghosh, Jay kadane,  Glen Meeden, Robert Serfling, Jayaram Sethuraman, Terry Speed, and  Alan Welsh.

“This book … contains eleven commentaries written by experts in the area of statistical methodology and inference. … I enjoyed re-reading some of the articles with great interest and pleasure. This valuable collection has some nice pieces of statistical and mathematical works, and provides historical developments of some of the important work in respective statistical field. Undoubtedly, this book will be of interest to researchers in probability, statistics, and related fields. The editor did a wonderful job in organizing this volume.” (Technometrics, Vol. 53 (4), November, 2011)