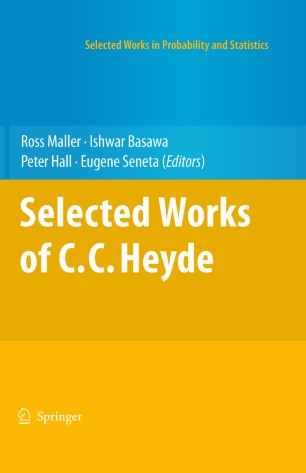 This volume is dedicated to the memory of the late Professor C.C. (Chris) Heyde (1939-2008), distinguished statistician, mathematician and scientist. Chris worked at a time when many of the foundational building blocks of probability and statistics were being put in place by a phalanx of eminent scientists around the world. He contributed significantly to this effort and took his place deservedly among the top-most rank of researchers. Throughout his career, Chris maintained also a keen interest in applications of probability and statistics, and in the history of the subject. The magnitude of his impact on his chosen area of research, both in Australia and internationally, was well recognised by the abundance of honours he received within and without the profession. The book is comprised of a number of Chris’s papers covering each one of four major topics to which he contributed. These papers are reproduced herein. The topics, and the papers in them, were selected by four of Chris’s friends and collaborators: Ishwar Basawa, Peter Hall, Ross Maller (overall Editor of the volume) and Eugene Seneta. Each topic is provided with an overview by the selecting editor. The topics cover a range of areas to which Chris made especially important contributions: Inference in Stochastic Processes, Rates of Convergence in the Central Limit Theorem, the Law of the Iterated Logarithm, and Branching Processes and Population Genetics. The Editor and the other contributors to the volume include well known researchers in probability and statistics. The collection begins with an “author’s pick” of a number of his papers which Chris considered most interesting and significant, chosen by him shortly before his death. A biography of Chris by his close friend and collaborator, Joe Gani, is also included. An introduction by the Editor and a comprehensive bibliography of Chris’s publications complete the volume. The book will be of especial interest to researchers in probability and statistics, and in the history of these subjects.