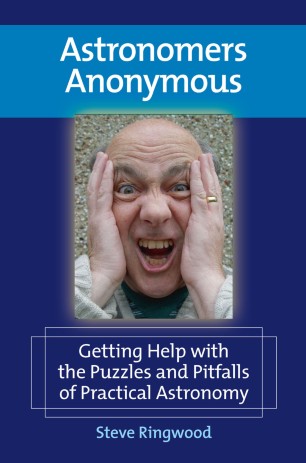 Getting Help with the Puzzles and Pitfalls of Practical Astronomy

In this entertaining parody of letters to a typical “lonely hearts” columnist, real-life expert and long-time astronomy columnist Steve Ringwood presents a sweeping overview of common questions and problems practical and amateur astronomers face, compiled from Ringwood's own experiences in the world of astronomy. His screamingly funny comments will keep you laughing out loud throughout, so be careful of reading this book in public! Written especially for troubled astronomers, but also accessible to anyone with an interest in space or astronomy, readers will easily recognize the difficulties they face and enjoy the humor being directed at them and their science.

Steve Ringwood was given his first astronomy book (The Golden Book of Astronomy) when he was nine, and, like many others of his generation, the Apollo years cemented his lifelong fascination with space. At 15 he bought his first telescope, a Japanese 40mm refractor. That first incredible view of a first quarter Moon had him hooked, and thus began the series of instrument acquisitions of steadily growing apertures that continues to this day. As a teen he joined the British Astronomical Association (BAA) and shortly afterwards joined his local astronomy group (Loughton Astronomical Society), which, at the time, was building its own observatory to house a 16" Cassegrain reflector. He later served many years on its committee – several of them as its chairman. During his forty years of astronomical activity Steve has encountered at first, second, and third hand many of the joys, pitfalls, and anxieties that astronomers of all shades face. His interest in astronomy and spaceflight has taken him all over the world – from the winter bleakness of northern Russia to the heat of northwestern Africa and the tropical wonders of Hawaii. Telescopically, his preferred targets are the Solar System planets, the Sun, and the Moon. He also has a keen interest in the history of astronomy. In addition to at one time editing his local group’s monthly journal, he has written for both U. S. and UK astronomy magazines. Together with occasional features and reviews, he currently produces a monthly product column for Astronomy Now. There have also been occasional ‘blink and you’ll miss it’ interactions with TV and radio. Despite a long career in IT, his passion is astronomy and palaeontology (fossil collecting). Elected a Fellow of the Royal Astronomical Society in 1984, he has written papers for the journals of both the BAA and the Royal Astronomical Society. With his wife and young son, he lives in a house chosen partly for its distance from sodium glow at night – a remoteness sadly decreasing with the passing years.

“A humorous book about astronomy, both entertaining and factual, sounds like fun. … Amateur astronomers and their families and friends are most likely to find it amusing, as they’re aware of the sometimes obsessive behavior of astronomers. And newbie observers would get a good deal of useful information from a seasoned observer. It could be fun light reading for anyone.” (bellaonline.com, February, 2014)

“Steve Ringwood’s book is very entertaining and informative, and very unusual. … Each request is given first, followed by a sharp and witty reply. These are followed by a serious, informative answer, again with wit and humour. Illustrations and drawings appear regularly. … Another very good book from Springer, to be relished.” (Richard Bailey, Popular Astronomy, January-February, 2011)

“Astronomers Anonymous is well worth buying, especially if you are going to be stuck on a transatlantic flight for eight hours! Steve has been writing entertaining stuff for decades and my first conscious recollection of a highly memorable Ringwood piece … . For me, it was hard to put the book down, and even the most stone-faced reader should find something to amuse them.” (Martin Mobberley, Astronomy Now, November, 2010)