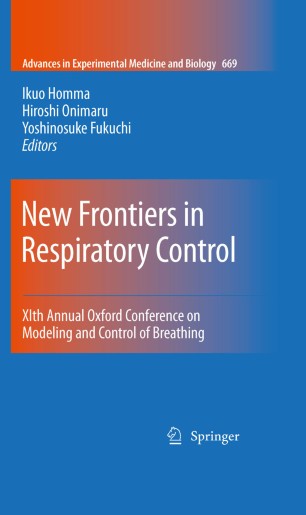 XIth Annual Oxford Conference on Modeling and Control of Breathing

Part of the Advances in Experimental Medicine and Biology book series (AEMB, volume 669)

Breathing is performed by the rhythmic contraction of respiratory muscles. It ma- tains homeostasis of the organism by taking in the oxygen necessary to live and work and by controlling the level of CO within the organism. At first glance, breathing 2 seems simple; however, it is produced by a complex system in the brain with various afferents and efferents. The control of breathing is of the utmost importance in s- taining life, and although more than 150 years have passed since research on brea- ing control was first begun, many unsolved mysteries still remain. Breathing is like watching the tides at a beach that are created by the vast, complex open sea. The first Oxford Conference on Modeling and Control of Breathing was held 30 years ago in September of 1978 at the University Laboratory of Physiology in Oxford, England. During this first conference, the participants engaged in a hot d- cussion on the problem of whether breathing rhythm was produced by pacemaker cells or a neural network. This was before the discovery of the Bötinger complex in the medulla, and at the time, central chemoreceptive areas were still the focus of research. This conference was an especially unforgettable moment in the dawning of the new age of respiratory research. It has since been held every 3 years in various countries around the globe and is widely appreciated as the best respiratory meeting in the world.