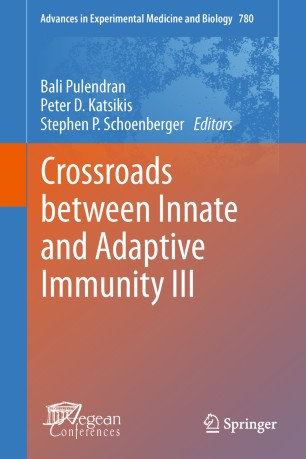 Part of the Advances in Experimental Medicine and Biology book series (AEMB, volume 780)

This volume presents a collection of reviews derived from work presented at the Aegean Conference: “3rd Crossroads between innate and adaptive immunity” which occurred during September 27 - October 2, 2009 at the Minoa Palace Conference Center in Chania, Crete, Greece. This meeting was the third in a series, and assembled a team of scientists working on mechanisms by which the innate immune system of the host senses pathogens, the cellular and signaling networks that orchestrate the innate response and antigen presentation and adaptive immunity. The various facets of the innate response, including dendritic cells, T cells, B cells, NK cells, NK-T cells and the complement cascade during the host response to pathogens and tumors is only now starting to be elucidated.  The respective fields that focus on these immune cells and molecules have tended to be relatively compartmentalized, and yet emerging evidence points to the interconnectedness of these facets in coordinating the innate response, and its subsequent impact on the adaptive response.  The goal of this conference was to initiate cross-talk between these diverse immunological fields, and promote and facilitate discussion on the interactions between the innate immune response and the adaptive immune response and ultimately facilitate collaboration between these areas of study. Following on the footsteps of the outstanding success of its precursors, the  “3rd Crossroads between Innate and Adaptive Immunity” Aegean Conference was highly successful in bringing together and connecting scientists and experts from around the world to address critical areas of Innate and Adaptive immunity.