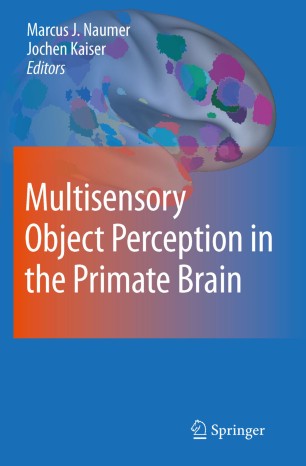 Traditionally a large proportion of perceptual research has assumed a specialization of cortical regions for the processing of stimuli in a single sensory modality. However, perception in everyday life usually consists of inputs from multiple sensory channels. Recently the question of how the brain integrates multisensory information has become the focus of a growing number of neuroscientific investigations. This work has identified both multisensory integration regions and crossmodal influences in brain areas traditionally thought to be specific to one sensory modality. Furthermore, several factors have been identified that enhance integration such as spatio-temporal stimulus coincidence and semantic congruency.

Written for academic researchers and graduate students, the present book aims at elucidating the mechanisms of multisensory integration of object-related information with a focus on the visual, auditory, and tactile sensory modalities. Evidence will be presented from studies in both human and nonhuman primates at different levels of analysis ranging from intracranial electrophysiological recordings to non-invasive electro- or magnetoencephalography, functional magnetic resonance imaging, behavioral approaches, and computational modeling. Seventeen chapters have been aggregated in four sections: underlying mechanisms, audio-visual integration, visuo-tactile integration, and plasticity.

About the Editors:
Marcus J. Naumer studied biology, philosophy, and psychology at the universities of Freiburg and Landau in Germany. He obtained his PhD from the Faculty of Psychology and Neuroscience, University of Maastricht, The Netherlands. Since 2005 he has headed the Crossmodal Neuroimaging Lab at the Institute of Medical Psychology, Goethe University, Frankfurt, Germany. He conducts basic and clinical research on human multisensory (auditory, visual, and haptic) object perception using functional magnetic resonance imaging and magnetoencephalography.

Jochen Kaiser studied psychology at the universities of Mainz in Germany and Glasgow in Scotland. He obtained a PhD from Imperial College School of Medicine, University of London, UK, in 1998. In 2004 he was appointed Full Professor and Director of the Institute of Medical Psychology at Goethe University in Frankfurt am Main, Germany. He has conducted extensive research on auditory and audio-visual perception, short-term memory and cortical oscillations in humans, using magnetoencephalography and functional magnetic resonance imaging.

“This is an excellent study of auditory and visual processing in synchrony or at least close to ideal concurrent operations in the cerebral cortex of the monkey and human brains. … Anyone who does research in auditory, visual, decision making processes, speech, and vocalization will benefit greatly from this marvelous book. Neurophysiologists and primatologists should be very interested in this work.” (Joseph J. Grenier, Amazon.com, August, 2014)

“In this work for academic researchers and graduate students, international contributors from major laboratories explain the mechanisms of multisensory integration, with a focus on the visual, auditory, and tactile sensory modalities. They present evidence from studies of humans and nonhuman primates using various modalities including intracranial electrophysiological recording, noninvasive electroencephalography, functional magnetic resonance imaging, and computational modeling. … The book is illustrated with b&w and color images.” (SciTech Book News, December, 2010)
Buy options