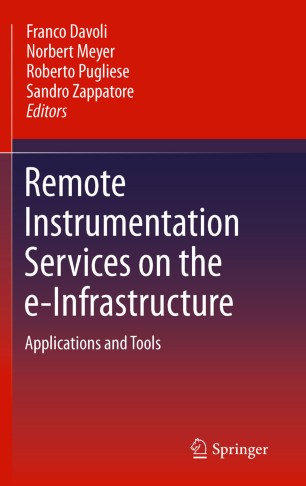 Remote Instrumentation Services on the e-Infrastructure

Franco Davoli Norbert Meyer Roberto Pugliese Sandro Zappatore (editors) Title: Remote Instrumentation for eScience and Related Aspects Accessing remote instrumentation worldwide is one of the goals of eScience. But the task of enabling the execution of complex experiments that involve the use of distributed scientific instruments requires a number of different architectural domains. Given the large number of different instruments and their application domains, understanding the common requirements, the user needs, the adaptation and convergence layers, among other things, is not simple, and that is the task of Remote Instrumentation Services (RIS). This text, like its predecessors, addresses the most relevant related aspects of RIS. Remote Instrumentation for eScience and Related Aspects is broken into five main parts. Part I centers on the concepts of Instrument Element and Virtual Control Room. Part II covers different features of Grid resource management on operations that are relevant in the context of RIS. Part III focuses on networking, one of the key supporting technologies that enable the interconnection of data sources and the transport of data. Part IV discusses application environments in various user communities, including eVLBI and its exploitation of high-speed networks, oceanographic applications, and road traffic data acquisition and modeling. And Part V is devoted to two learning environments where Remote Instrumentation plays a role of increasing importance; specifically it describes the main feature and demonstrator scenarios of BW-eLabs in Germany, and it reports on a distributed educational laboratory that is part of the “Wireless Trondheim” initiative in Norway.