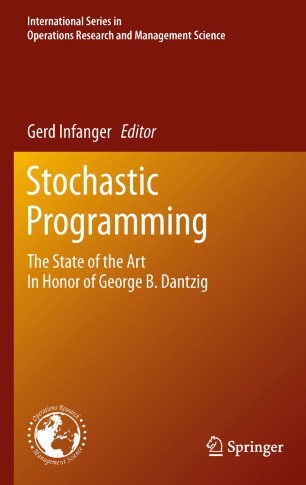 The State of the Art In Honor of George B. Dantzig

From the Preface… The preparation of this book started in 2004, when George B. Dantzig and I, following a long-standing invitation by Fred Hillier to contribute a volume to his International Series in Operations Research and Management Science, decided finally to go ahead with editing a volume on stochastic programming. The field of stochastic programming (also referred to as optimization under uncertainty or planning under uncertainty) had advanced significantly in the last two decades, both theoretically and in practice. George Dantzig and I felt that it would be valuable to showcase some of these advances and to present what one might call the state-of- the-art of the field to a broader audience. We invited researchers whom we considered to be leading experts in various specialties of the field, including a few representatives of promising developments in the making, to write a chapter for the volume. Unfortunately, to the great loss of all of us, George Dantzig passed away on May 13, 2005. Encouraged by many colleagues, I decided to continue with the book and edit it as a volume dedicated to George Dantzig. Management Science published in 2005 a special volume featuring the “Ten most Influential Papers of the first 50 Years of Management Science.” George Dantzig’s original 1955 stochastic programming paper, “Linear Programming under Uncertainty,” was featured among these ten. Hearing about this, George Dantzig suggested that his 1955 paper be the first chapter of this book. The vision expressed in that paper gives an important scientific and historical perspective to the book.