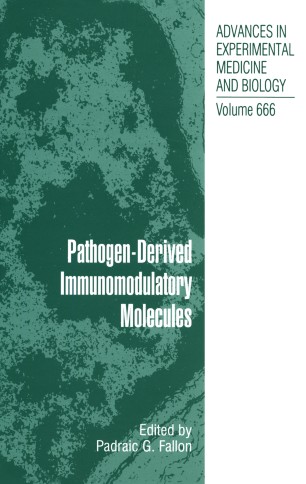 Part of the Advances in Experimental Medicine and Biology book series (AEMB, volume 666)

Pathogen-Derived Immunomodulatory Molecules is a book title that may require some explanation. Pathogens that are present today have evolved following a long association with man and have developed unique strategies that have been optimized by natural selection to subvert the host immunity. As we approach the 200th anniversary of Charles Darwin’s birth, it is appropriate to appreciate that Darwin recognized that pathogens (infections) play a significant and potent role in natural selection, encompassed by the concept “infection begets natural selection”. This book therefore examines the molecules that pathogens produce, which can modulate or usurp the functions of the immune system.

The idea of using molecules from pathogens as a therapeutic is an ancient concept in medicine. Such a strategy is exemplified by vaccination, with pathogen molecules employed to induce protective immunity against the given or related species of pathogen. The following chapters explore the concept of using pathogen-derived immune modulating molecules as a therapy. In doing so, they may provide the drug cabinet of the future for treating a spectrum of unrelated disease. Herein, a range of immune modulating molecules or strategies from various pathogens is examined in one volume.

The intention of the book was to have chapters addressing immunomodulating molecules from different pathogens. The range of pathogens considered includes bacteria (chapters by Williams, van Strijp and Rooijakkers), viruses (chapters by Bowie, McFadden), protozoan parasites (Aliberti), helminths (Harnett, Fallon), fungi (Sorrell) and parasitic ticks (Anguita). Chapters also address specific immunomodulatory molecules or strategies. The diversity of aspects addressed in the book is highlighted by Lucas and colleagues review of the ‘saga’ of viral serine proteinase inhibitors, with a focus on Serp-1, the first new generation of pathogen immunomodulatory molecule currently in clinical trials. While Elliott and Weinstock have contributed a provocative chapter exploring the use of live parasitic helminth infections as a therapeutic strategy for immune-mediated diseases; indeed trials have already been completed for such an approach. With respect to pathogens usurping an immune pathway, Alcami and colleagues here reviewed the growing number of pathogens that have evolved a range of molecules that can modify many aspects of the chemokine system.

This book is timely due to the need to expand the horizons of conventional drug discovery. A trend in the biopharmaceutical pipeline of fewer drugs to market is illustrated by USA FDA in 2007 approving the lowest number of new molecular entities since 1983. As the drug discovery and development industry broadens its search for new drugs to less traditional strategies, this book will be a reference to the potential for exploiting pathogen as a source of the anti-inflammatory drugs of the future.

Finally, this book whets the appetite for the reader, whether in academia or industry, to explore opportunities for exploiting pathogens for the discovery of new processes in immunobiology and, ultimately, for development of new therapies for human inflammatory diseases.

Padraic G. Fallon is Stokes Professor of Translational Immunology, School of Medicine, Trinity College Dublin, Ireland. Formally he was a Wellcome Trust Fellow, in the Department of Pathology, University of Cambridge, UK. He is currently the head of the Inflammation and Immunity Research Group, Institute of Molecular Medicine, St James’s Hospital, Trinity College Dublin. Using both animal and cellular models, Professor Fallon’s research addresses the mechanisms of modulation of human inflammatory diseases by pathogens, with a focus on parasitic helminths. The objective of the research is to develop novel therapeutic strategies for the treatment of inflammatory or autoimmune diseases. Allergic lung and skin inflammation and inflammatory bowel disease are the principal human diseases investigated by the Fallon Inflammation and Immunity Research Group. Since 1998, pathogen-derived immunomodulatory molecules have been a central theme in Professor Fallon’s research.