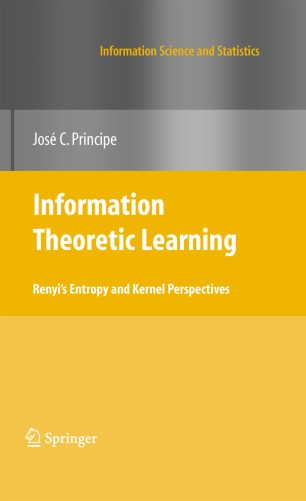 Part of the Information Science and Statistics book series (ISS)

This book presents the first cohesive treatment of Information Theoretic Learning (ITL) algorithms to adapt linear or nonlinear learning machines both in supervised or unsupervised paradigms. ITL is a framework where the conventional concepts of second order statistics (covariance, L2 distances, correlation functions) are substituted by scalars and functions with information theoretic underpinnings, respectively entropy, mutual information and correntropy.

ITL quantifies the stochastic structure of the data beyond second order statistics for improved performance without using full-blown Bayesian approaches that require a much larger computational cost. This is possible because of a non-parametric estimator of Renyi’s quadratic entropy that is only a function of pairwise differences between samples. The book compares the performance of ITL algorithms with the second order counterparts in many engineering and machine learning applications.

Students, practitioners and researchers interested in statistical signal processing, computational intelligence, and machine learning will find in this book the theory to understand the basics, the algorithms to implement applications, and exciting but still unexplored leads that will provide fertile ground for future research.