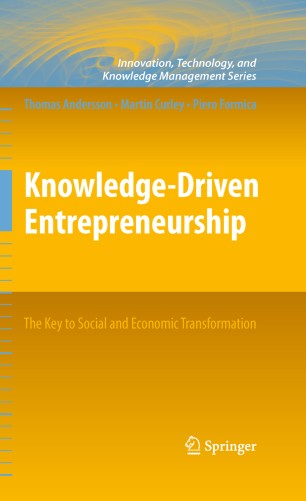 The Key to Social and Economic Transformation

The current economic era, characterized by the rapid and global dissemination of information and capital, has been called the "knowledge age," the "entrepreneurial society," and the "intangibles economy," among other labels. Technological and productivity improvements continue to shift the emphasis from the mastery of physical assets (e.g., natural resources, factories) and physical tools (e.g., machines) to that of intangible assets (e.g., education, R&D projects, brands, patents) and socio-cultural tools (e.g., communities of knowledge practice) as the key to a community’s economic prosperity. The purpose of this book is to build a bridge between knowledge and entrepreneurship, which have traditionally been separated by the walls of academic disciplines. Building on the pioneering work of Peter Drucker and William Baumol, the authors explore the intricate relationships among knowledge generation, innovation, new business creation, and the institutions that support them. Demonstrating direct links between the flow and application of knowledge, innovations in products and processes, the development of new enterprises, and generation of economic wealth, the authors strongly argue that these assets must be protected and sustained through national and regional institutions that encourage creativity and experimentation. Employing illustrative examples from around the world, the authors focus on the crucial role of societies to educate and support entrepreneurs and establish the right environment for new business development and rapid conversion of ideas into enterprises that contribute to economic growth and prosperity.

Thomas Andersson is Professor at the International Entrepreneurship Academy, Jönköpking University. He has published widely on international economics and industrial organization and has been a visiting fellow at Harvard University, Bank of Japan, Hitotsubashi University, and University of Sao Paulo. Previously, he was Deputy Director for Science, Technology and Industry at the Organisation of Economic Cooperation and Development (OECD). He also coordinated the technology part of the OECD Jobs Study, the OECD Growth Study, and a program with the World Bank on building knowledge-based economies. Prior to the OECD, Professor Andersson was Assistant Under-Secretary and Head of the Structural Policy Secretariat in the Swedish Ministry of Industry and Commerce and director of the international research program of the Industrial Institute for Economic and Social Research in Stockholm (IUI). He has been Senior Advisor to the Swedish Agency for Innovation Systems (VINNOVA) and main secretary of the Ministers of Finance project on the Nordic countries and the New Economy. He has served on the International Advisory Board of Umeå School of Business and Economics and on the International Advisory Board of World Knowledge Forum, Korea. He is also President of the board for the International Organisation for Knowledge Economy and Enterprise Development (IKED) and Chairman of the International Steering Group of the Global Trust Center (GTC). He serves on the board of Swedish Program for ICT in Developing Regions (SPIDER) and is a member of the Steering Committee of the Global Forum, the International Advisory Committee of the Competitiveness Institute, and the Royal Swedish Academy of Engineering Sciences (IVA).

Martin Curley is Senior Principal Engineer and Global Director of IT Innovation and Research at Intel Corporation. Previously, he held a number of IT Management positions for Intel, including Director of IT Strategy and Technology based in Sacramento, California, and Fab14 Automation Manager based in Dublin, Ireland. He has also held IT engineering and management positions at General Electric in Ireland and Philips in the Netherlands. Curley has a degree in Electronic Engineering and a Masters in Business Studies from University College Dublin, Ireland, and is author of Managing Information Technology for Business Value (Intel Press, 2004). He is also an Adjunct Professor at the National University of Ireland, Maynooth, and the National College of Ireland. He was a visiting scholar at MIT Sloan Centre for Information Systems Research in 2005 and 2006.