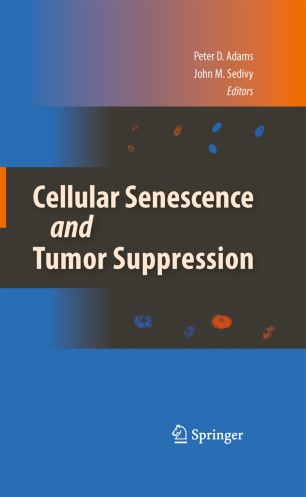 Leonard Hayflick and colleagues coined the term "cellular senescence" to describe the inevitable and irreversible proliferation arrest of primary human cells in culture. Specifically, Hayflick and coworkers reported the phenomenon of replicative senescence in primary human fibroblasts, showing that these cells can proliferate in vitro for about 55 population doublings before their proliferative capacity succumbs to irreversible proliferation arrest.

Since those original observations, major advances in our understanding have come in several areas. We now know that several other triggers, in addition to proliferative exhaustion, can trigger the senescence program. One important class of senescence triggers, and a focus of this volume, are activated oncogenes in primary untransformed cells. There is now good evidence to indicate that senescence in response to this cue is a potent tumor suppressor mechanism, through its ability to block proliferation of incipient cancer cells. However, senescence is not simply a passive proliferation arrest that impacts only the senescent cell itself, but rather, senescent cells influence their environment and neighboring cells through an active secretory program. This secretory program appears to facilitate senescence as a tumor suppression process.

Cellular Senescence and Tumor Suppression collects a number of chapters from leaders in the field to review the molecular basis of senescence and its physiological functions, with a particular emphasis on the role of senescence in tumor suppression.