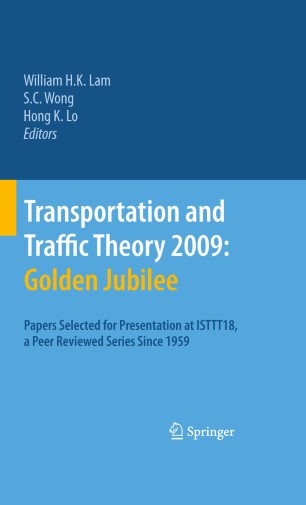 The series of International Symposia on Transportation and Traffic Theory (ISTTT) is the main gathering for the world’s transportation and traffic theorists, and those who are interested in contributing to or gaining a deeper understanding of traffic and transportation phenomena in order to better plan, design and manage the transportation system. Although it embraces a wide range of topics, from traffic flow theories and demand modeling to road safety and logistics and supply chain modeling, the ISTTT is hallmarked by its intellectual innovation, research and development excellence in the treatment of real-world transportation and traffic problems. The ISTTT prides itself in the extremely high quality of its proceedings. Previous ISTTT conferences were held in Warren, Michigan (1959), London (1963), New York (1965), Karlsruhe (1968), Berkeley, California (1971), Sydney (1974), Kyoto (1977), Toronto (1981), Delft (1984), Cambridge, Massachusetts (1987), Yokohama (1990), Berkeley, California (1993), Lyon (1996), Jerusalem (1999), Adelaide (2002), College Park, Maryland (2005), and London (2007). It is timely to organize the 18th ISTTT in Hong Kong, as the thrust of transportation infrastructure development has emerged strongly in Asia. The 18th ISTTT celebrates the 50th Anniversary of this premier conference series.

This volume contains 35 chapters selected for presentation at the 18th ISTTT from 230 extended abstracts and subsequently 108 invited full paper submissions, following a rigorous two-tier peer review process. They address a wide range of topics covering both scientific and operational aspects of transportation and traffic, spanning all modes of transport, including freight as well as private and public transport.