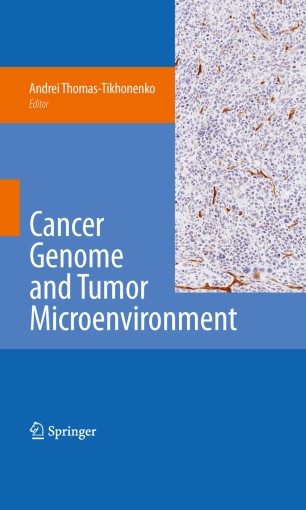 Oncogenes and tumor suppressor genes had been traditionally studied in the context of cell proliferation, differentiation, senescence, and survival, four relatively cell-autonomous processes. Consequently, in the late ‘80s-mid ‘90s, neoplastic growth was described largely as a net imbalance between cell accumulation and loss, brought about through mutations in cancer genes. In the last ten years, a more holistic understanding of cancer slowly emerged, stressing the importance of interactions between neoplastic and various stromal components: extracellular matrix, basement membranes, fibroblasts, endothelial cells of blood and lymphatic vessels, tumor-infiltrating lymphocytes, etc . Nevertheless, the commonly held view is that changes in tumor microenvironment are "soft-wired", i.e. epigenetic in nature and often reversible. Yet, there exists a large body of evidence suggesting that well-known mutations in cancer genes profoundly affect tumor milieu. In fact, these cell-extrinsic changes might be one of the primary reasons such mutations are preserved in late-stage tumors. Cancer Genome and Tumor Microenvironment reviews how tumor microenvironment and progression can be "hard-wired", i.e. genetically controlled.

“This book compiles recent works on genetic alterations that have been associated with carcinogenesis and attempts to present these in the context of the interaction of tumor cells with their microenvironment. The book provides a great deal of information on specific subjects of research, and is very useful as a reference. … The audience includes scientists and physicians involved in basic and translational research.” (Khashayarsha Khazaie, Doody’s Review Service, July, 2010)

“This book amends a space of nowaday cancer bibliography in the area of tumor microenvironment as it provides detailed overview of crucial steps of tumorigenesis. Book consists of 20 chapters that are divided into 4 main parts in addition to introductory editor’s part providing short characteristics of particular chapters and closing one. … The book is very useful for PhD students and for all researchers who intend to be more oriented in advances of molecular oncology. Therefore the book is highly recommended.” (J. Sedlák, Neoplasma, February, 2011)