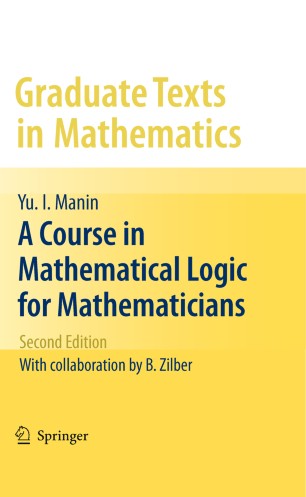 A Course in Mathematical Logic for Mathematicians

A Course in Mathematical Logic for Mathematicians, Second Edition offers a straightforward introduction to modern mathematical logic that will appeal to the intuition of working mathematicians. The book begins with an elementary introduction to formal languages and proceeds to a discussion of proof theory. It then presents several highlights of 20th century mathematical logic, including theorems of Gödel and Tarski, and Cohen's theorem on the independence of the continuum hypothesis. A unique feature of the text is a discussion of quantum logic.

The exposition then moves to a discussion of computability theory that is based on the notion of recursive functions and stresses number-theoretic connections. The text present a complete proof of the theorem of Davis–Putnam–Robinson–Matiyasevich as well as a proof of Higman's theorem on recursive groups. Kolmogorov complexity is also treated.

Yuri Ivanovich Manin is Professor Emeritus at Max-Planck-Institute for Mathematics in Bonn, Germany, Board of Trustees Professor at the Northwestern University, Evanston, IL, USA, and Principal Researcher at the Steklov Institute of Mathematics, Moscow, Russia. Boris Zilber, Professor of Mathematical Logic at the University of Oxford, has contributed the Model Theory Chapter for the second edition.

"As one might expect from a graduate text on logic by a very distinguished algebraic geometer, this book assumes no previous acquaintance with logic, but proceeds at a high level of mathematical sophistication. Chapters I and II form a short course. Chapter I is a very informal introduction to formal languages, e.g., those of first order Peano arithmetic and of ZFC set theory. Chapter II contains Tarski's definition of truth, Gödel's completeness theorem, and the Löwenheim-Skolem theorem. The emphasis is on semantics rather than syntax. Some rarely-covered side topics are included (unique readability for languages with parentheses, Mostowski's transitive collapse lemma, formalities of introducing definable constants and function symbols). Some standard topics are neglected. (The compactness theorem is not mentioned!) The latter part of Chapter II contains Smullyan's quick proof of Tarski's theorem on the undefinability of truth in formal arithmetic, and an account of the Kochen-Specker "no hidden variables" theorem in quantum logic. There are digressions on philosophical issues (formal logic vs. ordinary language, computer proofs). A wealth of material is introduced in these first 100 pages of the book..."--MATHEMATICAL REVIEWS

“The new extended title of this book corresponds more to its concept, contents, spirit and style. The book is really addressed to mathematicians and introduces the reader to the glorious discoveries in logic during the last century through the difficult and subtle results, problems, proofs and comments. … due to the author’s brilliant style, each part of the book provokes new opinions and pleasure of a different understanding of basic results and ideas of contemporary mathematical logic.” (Branislav Boričić, Zentralblatt MATH, Vol. 1180, 2010)