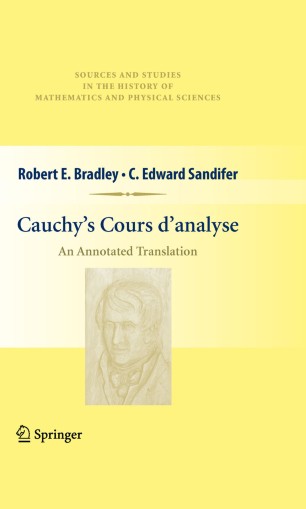 This is an annotated and indexed translation (from French into English) of Augustin Louis Cauchy's 1821 classic textbook Cours d'analyse. This is the first English translation of a landmark work in mathematics, one of the most influential texts in the history of mathematics. It belongs in every mathematics library, along with Newton's Principia and Euclid's Elements.

The authors' style mimics the look and feel of the second French edition. It is an essentially modern textbook style, about 75% narrative and 25% theorems, proofs, corollaries. Despite the extensive narrative, it has an essentially "Euclidean architecture" in its careful ordering of definitions and theorems. It was the first book in analysis to do this.

Cauchy's book is essentially a precalculus book, with a rigorous exposition of the topics necessary to learn calculus. Hence, any good quality calculus student can understand the content of the volume.

The basic audience is anyone interested in the history of mathematics, especially 19th century analysis.

In addition to being an important book, the Cours d'analyse is well-written, packed with unexpected gems, and, in general, a thrill to read.