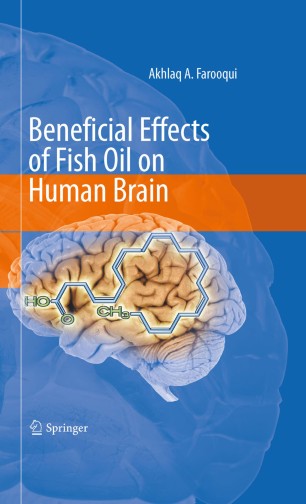 It is becoming increasingly evident that the deficiency of n-3 fatty acids in diet is not only associated with cardiovascular diseases, but also involved in stroke, epilepsy and other neurological and neurodegenerative diseases, such as Alzheimer disease, Parkinson disease, and peroxisomal diseases. In his newest book, Beneficial Effects of Fish Oil on Human Brain, Dr. Akhlaq A. Farooqui expands on the status and therapeutic importance of n-3 fatty acids (major components of fish oil) and their mediators in normal brain and those with neurodegenerative and neuropsychiatric diseases. Farooqui presents the benefits of n-3 fatty acids on Western diet, which is enriched in n-6 fatty acids (major components of vegetable oil) and may promote the above neurological disorders. The book will present readers with cutting edge and comprehensive information on metabolism and roles of neural membrane n-3 fatty acids.

Dr. Akhlaq A. Farooqui is a leader in the field of brain phospholipases A2, bioactive ether lipid metabolism, polyunsaturated fatty acid metabolism, glycerophospholipid-, sphingolipid-, and cholesterol-derived lipid mediators, and glutamate-induced neurotoxicity. He has discovered the stimulation of plasmalogen-selective phospholipase A2 (PlsEtn-PLA2) and diacyl- and monoacylglycerol lipases in brains from patients with Alzheimer disease. Stimulation of PlsEtn-PLA2 produces plasmalogen deficiency and increases levels of eicosanoids that may be related to the loss of synapses in brains of patients with Alzheimer disease. Dr. Farooqui has published cutting edge research on the generation and identification of glycerophospholipid-, sphingolipid-, and cholesterol-derived lipid mediators in kainic acid neurotoxicity by lipidomics. He has previously authored four monographs: Glycerophospholipids in Brain: Phospholipase A2 in Neurological Disorders (2007); Neurochemical Aspects of Excitotoxicity (2008); Metabolism and Functions of Bioactive Ether Lipids in Brain (2008); and Hot Topics in Neural Membrane Lipidology (2009). All monographs are published by Springer.