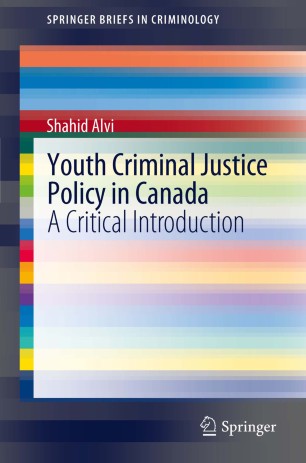 In the past ten years, much has changed in terms of youth justice policies in Canada as well as in the way Canadian society has evolved. Canada has a new Act governing youth crime, and there are indications that the Act will be revised again to make it "tougher" on youth in conflict with the law, a development reflecting what many scholars are calling the "punitive turn" in youth justice policies in Canada and elsewhere. At the same time, Canadian child poverty rates (which are strongly correlated with criminality) have remained high, despite a commitment, made by governments in 1989 to eradicate the problem by the year 2000. Immigration patterns have changed, and unemployment rates for young Canadians remain almost twice as high as those for adults.
In this volume, Youth Criminal Justice Policy in Canada: A Critical Introduction, the author addresses these and other developments in relation to youth crime in Canada from a critical criminological perspective.

Shahid Alvi, PhD., is Professor & Associate Dean in the Faculty of Criminology, Justice & Policy Studies at the University of Ontario Institute of Technology. He has taught at both the graduate and undergraduate level for more than 20 years. His research interests include youth crime, social exclusion, violence against immigrant women, and communities and crime. He is the author or co-author of numerous refereed journals, technical reports, book chapters, and four books. He is currently conducting research on public safety concerns in an urban setting in Ontario, Canada, and is analyzing data on young offenders’ adjustment to incarceration. In 2002, he was awarded the Critical Criminologist of the Year Award by the Division of Critical Criminology of the American Society of Criminology. He is also Editor-in-Chief, of the scholarly journal, Critical Criminology: An International Journal (Springer).