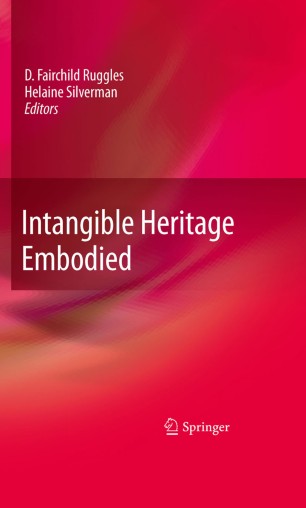 Archaeological research has long focused on studying tangible artifacts to build a picture of the cultures it examines. Equally important to understanding a culture, however, are the intangible elements that become part of its heritage. In 2003, UNESCO adopted a convention specifically to protect intangible heritage, including the following: oral traditions and expressions, including language; performing arts (such as traditional music, dance, and theater); social practices, rituals, and festive events; knowledge and practices concerning nature and the universe; and traditional craftsmanship.

Since this convention was adopted, scholars and preservationists have struggled with how to best approach intangible heritage. This volume specifically focuses on embodied intangible heritage, or the human body as a vehicle for memory, movement, and sound. The contributors to this work examine ritual and artistic movement, theater, music, oral literature, as well as the role of the internet in cultural transmission. Globalization and particularly the internet, has a complex effect on the transmission of intangible heritage: while music, dance, and other expressions are now shared easily, the performances often lack context and may be shared with a group that does not fully understand what they are seeing or hearing.

This volume draws on case studies from around the world to examine the problems and possibilities of implementing the new UNESCO convention. The findings in this volume will be vital to both professionals and academics in anthropology, archaeology, history, museum studies, architecture, and anyone else who deals with issues of cultural heritage and preservation.