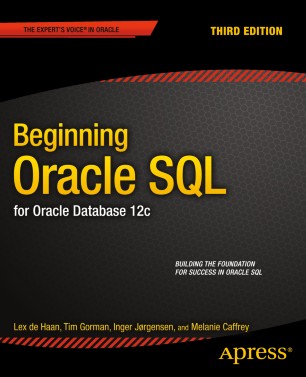 Beginning Oracle SQL is your introduction to the interactive query tools and specific dialect of SQL used with Oracle Database. These tools include SQL*Plus and SQL Developer. SQL*Plus is the one tool any Oracle developer or database administrator can always count on, and it is widely used in creating scripts to automate routine tasks. SQL Developer is a powerful, graphical environment for developing and debugging queries.

Oracle's is possibly the most valuable dialect of SQL from a career standpoint. Oracle's database engine is widely used in corporate environments worldwide. It is also found in many government applications. Oracle SQL implements many features not found in competing products. No developer or DBA working with Oracle can afford to be without knowledge of these features and how they work, because of the performance and expressiveness they bring to the table.

Written in an easygoing and example-based style, Beginning Oracle SQL is the book that will get you started down the path to successfully writing SQL statements and getting results from Oracle Database.

Tim Gorman began his information technology career in 1984 as a C programmer on UNIX and VMS systems, working on medical and financial systems as an application developer, systems programmer, and systems administrator. He joined Oracle Corporation in 1990 as a consultant, then became an independent consultant in 1998, and has worked for SageLogix since 2000. Gorman is the coauthor of Essential Oracle8i Data Warehousing and Oracle8 Data Warehousing. He specializes in performance tuning applications, databases, and systems, as well as data warehouse design and implementation, backup and recovery, architecture and infrastructure, and database administration. Gorman still considers himself a pretty good coder, although the market for C programs has dried up somewhat lately.