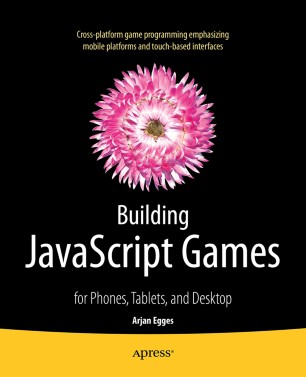 For Phones, Tablets, and Desktop

Building JavaScript Games teaches game programming through a series of engaging, arcade-style games that quickly expand your JavaScript and HTML5 skills. JavaScript is in the top ten most-used programming languages world wide, and is the basis for applications that can run in any modern browser, on any device from smart phone to tablet to PC. Especial emphasis is given to touch-based interface, but all games also run using a regular mouse and keyboard setup.

The four games you’ll develop from reading this book are:

The approach in Building JavaScript Games follows the basic structure of a game rather than the syntax of a language. From almost the very first chapter you are building games to run on your phone or other device and show to your friends. Successive projects teach about handling player input, manipulating game objects, designing game worlds, managing levels, and realism through physics. All told, you’ll develop four well-designed games, making Building JavaScript Games one of the most enjoyable ways there is to learn about programming browser-based games.

The final chapters in the book contain a very nice bonus of sorts. In them you will find excerpts from interviews with two prominent people from the game industry: Mark Overmars, who is CTO of Tingly Games and creator of GameMaker, and Peter Vesterbacka, the CMO of Rovio Entertainment - the creators of the Angry Birds franchise. Their insight and perspective round off what is already a fun and valuable book.

Arjan Egges is an associate professor in Computer Science at Utrecht University in the Netherlands. He is responsible there for research in the area of computer animation, and he heads the university s motion capture lab in the animation department. Arjan has written over 30 research papers on animation. He is the founder of the highly successful, annual ACM SIGGRAPH conference on Motion in Games, of which the proceedings have been published by Springer-Verlag. Arjan is responsible for having designed Utrecht University s computer animation course offerings in the Game and Media Technology master s program, and he is currently the leader of that master s program. In 2011 he designed the introductory programming course for the university s bachelor s degree offering in Game Technology. He is coauthor of the book Learn C# by Programming Games, published in 2013 by Springer.