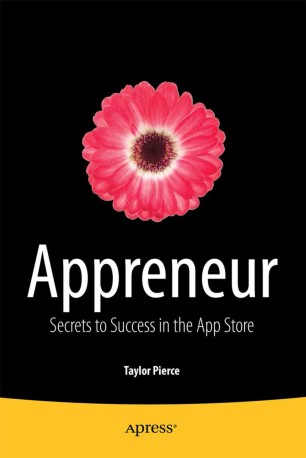 Secrets to Success in the App Store

You are interested in making an app. You have read all of the stories of successful developers and appreneurs. You are determined to get a piece of the pie. The world of apps is the fastest growing market in the world today, and it is here to stay. The best part is you can get in on it! Now what if I told you that without the knowledge contained in this book the odds of you making a profit are slim to none? What if I also told you that you probably wouldn’t break even? There is more to apps than most people think. The average person assumes that if they make an app, they will instantly become a millionaire. The truth is without the knowledge from years of successes and failures, you just won’t know where to begin.

Appreneur book contains tips, tricks, secrets, and stories from the top developers, appreneurs, and companies from around the globe. After reading this book, you will have the knowledge to bring your idea to life, market it, promote it, and sell it in a way that would have otherwise been impossible.

Taylor Pierce has been developing apps since Apple’s App Store opened to the public in 2009. In the summer of 2010, Taylor was awarded an internship at the coveted Apple Headquarters in Cupertino, California. He has developed over 60 apps, many of which have ranked consistently among Apple’s top 200. Taylor has firsthand knowledge of what makes apps marketable and profitable. He is currently the Lead Developer at Klinklife, LLC.Because of Taylor’s direct knowledge of clients’ needs, the specifics of app design, and the ever-changing app market, he has designed this book as a reference tool for success in the App Store. Few people exist who possess Taylor’s level of expertise and experience with the App Store. He has built apps for nearly every category in the App Store and has accrued financial success not only for himself, but also for his clientele.In addition to app development, Taylor also offers consulting to individuals and companies who wish to maximize their app’s performance. This book was inspired by his desire to provide exceptional consultation services for his clientele. For his personal clients, he wanted to write a book a client could read to become informed of the ins and outs of the App Store.Follow Taylor on Twitter @taylorpierceapps.