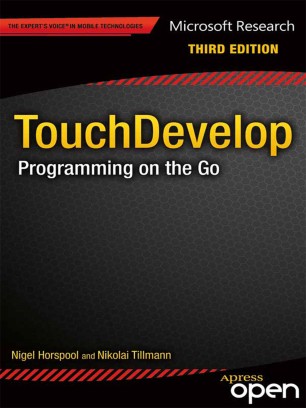 TouchDevelop: Programming on the Go

"The book is great! It's clear and easy to read, with loads of examples that showed my students what to do."

“Having the TouchDevelop book available made our events so much easier. Students could figure things out for themselves with help from the book.”

Mobile devices such as smartphones and tablets are set to become the main computers that virtually all people will own and carry with them at all times. And yet,mobile devices are not yet used for all computing tasks. A project at Microsoft Research was created to answer a simple question: “It is possible to create interesting apps directly on a smartphone or tablet, without using a separate PC or a keyboard?” The result is TouchDevelop, a programming environment that runs on all modern mobile devices such as Windows Phone, iPhone, iPad, Android phones and tablets, and also on PCs and Macs.

This book walks you through all of the screens of the TouchDevelop app, and it points out similarities and differences of the TouchDevelop language compared to other programming languages. For users, the book can serve as a handyreference next to the phone. The book systematically addresses all programming language constructs, starting from the very basic constructs such as variables and loops. The book also explores many of the phone sensors and data sources which make creating apps for mobile devices so rewarding.

If you are new to programming with TouchDevelop, or if you have not yet worked on touchscreen devices, we suggest that you read the book starting from Chapter 1. If you are already familiar with the basic paradigm of the TouchDevelop programming environment, then feel free to jump ahead to the later chapters that address particular topic areas.

Nigel Horspool is a professor of computer science at the University of Victoria. His main focus for research and teaching has been programming languages and compilers. He is the author or co-author of three books, which cover the C language, Unix and the C# language. He is currently the co- editor of the journal Software: Practice and Experience . He has a PhD from the University of Toronto, Canada in Computer Science.