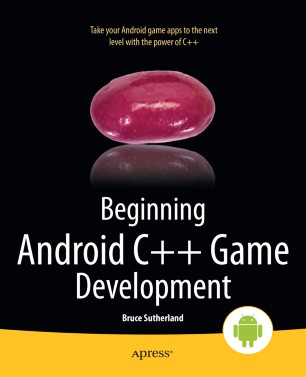 In this book, you'll learn all the major aspects of game design and programming using the Android NDK and be ready to submit your first professional video game app to Google Play and Amazon Appstore for today's Android smartphones and tablet users to download and play.

The techniques contained in this book include building a game engine, writing a renderer, and building a full game app with entities, game levels and collisions. As part of the tutorial you'll also learn about inserting perspectives using cameras and including audio in your game app.

Bruce Sutherland is a video game programmer hailing from Dundee, Scotland. He graduated with a Bsc (Hons) Computer Games Technology from the University of Abertay, Dundee in Scotland, graduating in 2005. After graduating he began his first job in the games industry at 4J Studios where he worked on Star Trek: Encounters (PS2), The Elder Scrolls IV: Oblivion (PS3), Star Trek: Conquest (PS2, Wii), Ducati Moto (NDS) and AMF Pinbusters! (NDS). In July 2008 he moved from Dundee to Melbourne Australia where he joined Visceral Studios and was a software engineer on Dead Space (Xbox 360, PS3, PC), The Godfather II (Xbox 360, PS3, PC) and Dead Space 3 (Xbox 360, PS3, PC). He developed an interest in developing for Android in his spare time and writes tutorials on his blog at http://brucesutherland.blogspot.com.