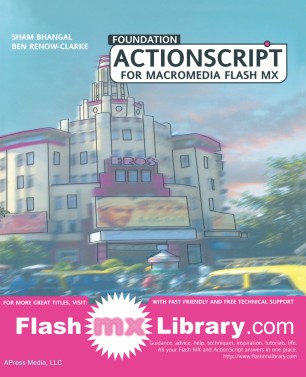 With the release of Flash MX, scripting in Flash moved from being a desirable asset to an essential skill in the world of web design. ActionScript is, quite simply, the center of power in Flash, and it's no surprise that most of the advances in Flash MX are script-centric.
Flash is a design tool, and ActionScript can easily scare designers. This book is for anyone who has ever looked in awe at a cutting-edge Flash site, then taken a look at some code, and run in the other direction. Learning ActionScript with friends of ED will not turn you into a boring programmer, it will turn you into someone who finally has the power to achieve what they want with their web design.
This book will take you from knowing nothing about ActionScript to a firm knowledge that will allow you to exercise a previously unimaginable amount of power over your flash movies. It does this with fully-0worked examples throughout, and a case study that will leave you with a cutting-edge Flash site by the end of the book.
The book assumes no previous knowledge of code or ActionScript, but does assume that you know the basics of the Flash interface, and have maybe created some basic timeline-based movies with tweens and so on. (If you're totally new to Flash, then you might want to take a look at friends of ED's acclaimed Foundation Flash MX, or at the more visually-oriented Flash MX Express.)