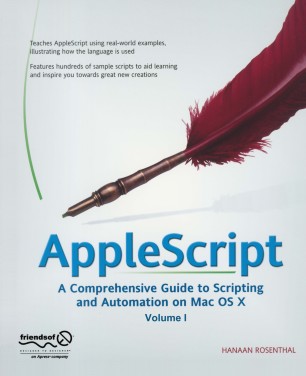 AppleScript: A Comprehensive Guide to Scripting and Automation on Mac OS X

AppleScript is a high level scripting language that resides on the Mac platform. It can be used to add functionality to the Mac operating system, automating tasks, adding functions, making things easier. AppleScript has always been very useful, and with Mac OS X, it can be taken even further than before.

This book goes the extra mile when teaching AppleScript, explaining advanced topics, while not leaving behind the beginner. It starts off with the basics, such, as handing variable, loops, and commands, then goes on to teach higher level concepts such as debugging, AppleScripting with databases, manipulating PDFs with SMILE, and automating media workflow.

If you are a Mac user who wants to know the real meaning of having full control over your machine, get into AppleScripting; this book is the only guide you need to master the art!

The founder of Custom Flow Solutions, Hanaan Rosenthal developed his first drawing program and published a programming newsletter at the age of 11. He became a digital media and prepress consultant in 1991, specializing in Mac publishing. In 1996, he took on his first full-blown AppleScript automation project and never looked back. Since then he has helped reshape the workflow of numerous publishing companies and departments creating systems that save their owners millions of dollars and thousands of man-hours annually. His clients include Fidelity Investments, Wellington Management, The Boston Globe, and Showtime Networks.