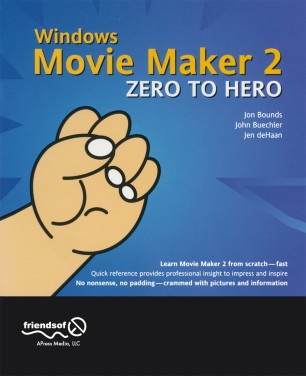 You've seen the promises in the advertising: Microsoft's free Movie Maker 2 will make it simple to capture, edit and share your home movies. We agree, but how do you know where to start, or where you're going? The answer is Windows Movie Maker 2 Zero to Hero, which will take you from filming your movie (with useful tips to improve the quality) through editing and adding effects, to premiering your masterpiece to your friends and family.

Zero to Hero is more than a catchy slogan and an opportunity for puns and graphical representations of tights, capes, and phone booths. It's a style of learning designed by friends of ED to reach beyond dry technical explanations and dusty old authors who don't know how it is for real users and wouldn't know good design if it slapped them round the face with a wet fish.

With a Zero to Hero book you can choose how you learn. You can choose to learn everything you need to know about Windows Movie Maker 2 by working through the first section of the book from start to finish. Alternatively, you can dive straight in to the inspirational 'Hero' chapters and refer back as and when you need. Then later, when you're a hero yourself, the book is easily used as a reference tool.

When you're done, you'll be ready to wear your underwear on the outside—metaphorically speaking, of course.

John Buechler has been a photographer and videographer from the pre-digital days of film cameras and projectors to the non-linear computerized editing of today. He uses many different photo and video editing software tools and, since its first release, he has been an avid user of Microsoft's Movie Maker. He lives in Kalamazoo, Michigan. In addition to doing freelance video work, he applies his photography, video and computer skills to home and family uses. He is called 'Papa' by his grandchildren and is known by many on the Internet as 'PapaJohn'. His personal website (papajohn.org), includes links to some of his movies. PapaJohn is active on several Microsoft-sponsored multimedia newsgroups. John was recognized by Microsoft as one of their 2003 "Most Valuable Professionals" in the multimedia area. He recently expanded his support role by becoming a moderator of the Movie Maker 2 Special Interest Group (SIG) for the Windows Media Los Angeles Users Group at windowsmedia.org.

"Microsoft’s Movie Maker 2 is a simple editing program that is simple to use and a great introduction to digital video. … Windows Movie Maker 2 Zero To Hero … has plenty of practical tips on how to use it effectively. … This book covers many of the features in Movie Maker 2 by using a mixture of images and screenshots. … complex exercises are detailed in steps. The writer clearly has a vast knowledge of the program … ." (Digital Video, Issue 14, 2004)