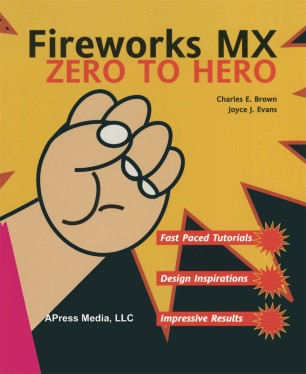 Fireworks MX Zero To Hero is intended for the majority of readers who don't need to be told when to jump, or ask how high. If you're new to Fireworks MX, this book will provide you with a fast learning curve to get you swiftly up to speed, and progressing towards the creativity you want to achieve; and if you already have some familiarity with any version of Fireworks, it'll provide many, many exercises and case studies that will extend your knowledge of techniques, tips, and tricks. In addition, the book serves as a handy reference to a reader of any level.

Structured into three distinctive sections, the aim of this book is to provide as much knowledge and as many skills and techniques as can fit into 450 pages.

Section One: Fireworks MX Primer. This section will get you familiar with the major tools and functionality of Fireworks MX, by example, and simple-to-understand explanation, and in fewer than 200 pages.

Section Two: Projects. Here you're introduced to case studies and examples that will give you practical, hands-on experience and provide exposure to the more complex tools in Fireworks MX—learning by experience. As well as practicing your new found skills, this is also the place where you'll learn many tips and tricks of the trade. You can view an exercise from this section here.

Section Three: Real-World. In this section we look at Fireworks MX as it's used in the real world of professional design not just as a standalone application, but as part of the formation of the designers creative toolbox.

Charles Brown is one of the most noted author, consultant, and trainers in the industry today. His books about Dreamweaver and Fireworks have received critical acclaim and used worldwide as teaching tools. In addition to his work in the IT industry, Charles is also a noted concert pianist, organist, and guitarist appearing in major concert centers world-wide. He began his musical studies at age 4 and went on to study with famed pianist Vladimir Horowitz. At age 14, he made his debut with Leonard Bernstein and later studied at the famed Juilliard School. Eventually he went to Paris to study with the 20th century legend, Igor Stravinsky. While working with Stravinsky, Charles developed a close friendship with one of the most powerful artistic forces of the 20th century: Pablo Picasso. What he learned about creativity from Picasso he uses today in his writings and training work. Charles is a certified Macromedia/Adobe trainer who is in heavy demand worldwide. He frequently speaks at major conferences such as MAX and NAB. You can see his blog at blog.charlesebrown.net and his website can be found at CharlesEBrown.net.