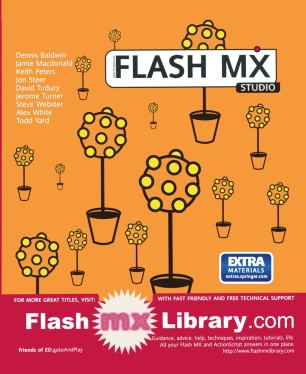 Flash MX Studio takes your raw Flash talent and multiplies its potency by focusing it on real-world web design situations. In the heady days of the late 1990s, designers were trying their hand at anything and everything they could lay their hands on. Now the marketplace is seriously focused, and serious Flash designers have to know exactly what they're doing and why. These days, it's all about functionality over experimentation, justification over style. It's all about maturity. The design must fit the job specs, and this book shows the reader how to fulfill these requirements and more.

This book examines all the avenues open to professional or aspiring professional Flash MX designers. It takes a look at advanced uses of the new MX features, such as components and the Drawing API, and gives guidance on building whole new structures for animation, Dynamic Content, PHP, ColdFusion MX, XML, video, audio and audiovisual formats.

Never before has so much power been so accessible to the web designer. This book is designed to put that power in your hands.

Flash MX Studio has been broken into four sections to address the most common needs for the Flash designer. First off, Jamie McDonald provides five chapters on site presentation and the principles of web design. These opening chapters take a look at how to create slick, professional-level sites, involving Flash MX's new drawing and motion capabilities and interactive techniques.

The second section concentrates on ActionScript. Flash's resident coding environment is crucial to master, and taps into Flash's great strength—intuitive and interactive applications. Keith Peters and Todd Yard have buddied up on this section, and examine some of the most advanced ActionScript techniques around. Be warned—this section is not for the faint-hearted!

The final section is devoted to expounding a few myths about dynamic content using Flash. Its four chapters talk about general practice, before focusing in on specific areas, including introductions to PHP and XML, together with a look at Macromedia's brand new ColdFusion MX.

Connor McDonald has worked with Oracle since the early 1990s, cutting his teeth on Oracle versions 6.0.36 and 7.0.12. Over the past 11 years, Connor has worked with systems in Australia, the U.K., southeast Asia, western Europe, and the United States. He has come to realize that although the systems and methodologies around the world are very diverse, there tend to be two common themes in the development of systems running on Oracle: either to steer away from the Oracle-specific functions or to use them in a haphazard or less-than-optimal fashion. It was this observation that led to the creation of a personal hints and tips website (http://www.OracleDBA.co.uk) and more, presenting on the Oracle speaker circuit in an endeavor to improve the perception and usage of PL/SQL in the industry.