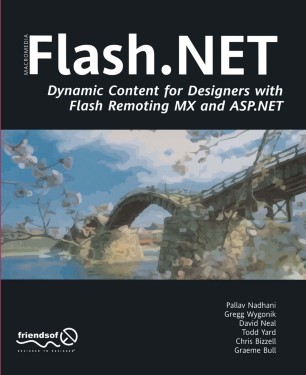 Combining these technologies has been greatly aided by the release of Macromedia's Flash Remoting MX, which is covered fully in this book. Designers and developers involved in the creation of this technology impart their knowledge to you in this book through extensive case studies.

Flash Remoting is not the only way to combine these technologies, however, so this book will fully cover Flash/.NET integration using ASP.NET.

This book is for readers who are looking to integrate their Flash movies with a .NET-enabled back-end. It assumes no prior knowledge of server-side technologies, but does require knowledge of Flash MX and ActionScript.

After studying theatre in London, then working for several years as an actor in the U.S.,�Todd Yard�was introduced to Flash in 2000 and was quickly taken by how it allowed for both stunning creativity and programmatic logic application�a truly left-brain, right brain approach to production�and has not looked back. He now freelances as a Flash developer in New York City, creating both silly animations and utilitarian applications. His personal work and experimentation can be found at his website, 27Bobs.com.