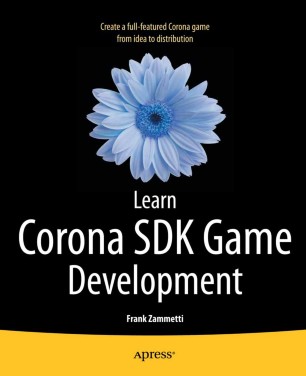 Corona SDK is one of the most popular app and game mobile development platforms in the world, and Learn Corona SDK Game Development walks you through creating a full-featured Corona game from scratch to the App Store.

You'll learn Lua basics (the foundation of Corona), how to add and manipulate graphics, and how to use controls like multitouch, accelerometer, and gyroscope. You'll also learn how to use Box2D (Corona physics under the hood), and how to add sound effects and music.

As you're polishing your game, you'll also learn about ads, in-app purchases, and OpenFeint and Game Center integration. Finally, you'll learn the ins and outs of getting a game into the App Store or other app marketplaces.