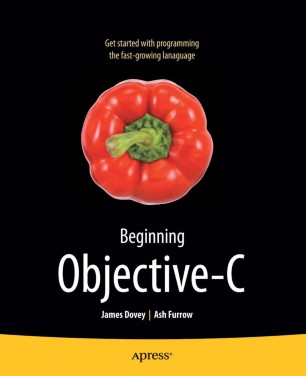 Beginning Objective-C offers you a modern programmer's perspective on Objective-C courtesy of two of the best iOS and Mac developers in the field today, and gets you programming to the best of your ability in this important language.  It gets you rolling fast into the sound fundamentals and idioms of Objective-C on the Mac and iOS, in order to learn how best to construct your applications and libraries, making the best use of the tools it provides— no matter what projects you plan to build. The book offers thorough introductions to the core tenets of the language itself and its primary toolkits: the Foundation and AppKit frameworks. Within its pages you will encounter a mine of information on many topics, including use of the file system and network APIs, concurrency and multi-core programming, the user interface system architecture, data modeling, and more.

You'll soon find yourself building a fairly complex Objective-C based application, and mastering the language ready for your own projects.

If you're new to programming altogether, then Apress has other Objective-C books for you such as our Learning and Absolute Beginner titles—otherwise, let your existing skills ramp you fast forwards in Objective-C with Beginning Objective-C so that you can start building your own applications quickly.

Jim Dovey has been working exclusively on Mac OS X and iOS since early 2001, during which time he has written filesystems, low-level system daemons, dynamic code generation and linking, and end-user applications for both the Macintosh and the iPhone. He was also one of the leaders of the unofficial Apple TV programming scene. Past projects have included a complete networked system management suite, a digital signage system based on the Apple TV, and the Outpost iPhone app for Basecamp users. Prior to his entry into the world of Macintosh programming, Jim wrote software for Windows and Palm handheld devices, and worked on touch- and gesture-based interfaces back when the iPhone was barely an idea. Jim currently works as a software development consultant based in Toronto, Ontario.