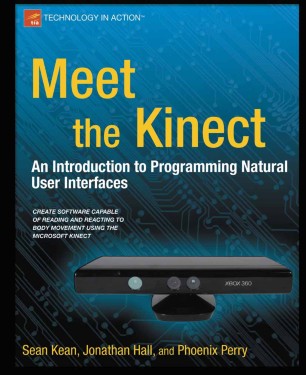 Meet the Kinect introduces the exciting world of volumetric computing using the Microsoft Kinect. You'll learn to write scripts and software enabling the use of the Kinect as an input device. Interact directly with your computer through physical motion. The Kinect will read and track body movements, and is the bridge between the physical reality in which you exist and the virtual world created by your software.

Microsoft’s Kinect was released in fall 2010 to become the fastest-selling electronic device ever. For the first time, we have an inexpensive, three-dimensional sensor enabling direct interaction between human and computer, between the physical world and the virtual. The Kinect has been enthusiastically adopted by a growing culture of enthusiasts, who put it to work in creating technology-based art projects, three-dimensional scanners, adaptive devices for sight-impaired individuals, new ways of interacting with PCs, and even profitable business opportunities.

Meet the Kinect is the resource to get you started in mastering the Kinect and the exciting possibilities it brings. You’ll learn about the Kinect hardware and what it can do. You’ll install drivers and learn to download and run the growing amount of Kinect software freely available on the Internet. From there, you’ll move into writing code using some of the more popular frameworks and APIs, including the official Microsoft API and the language known as Processing that is popular in the art and creative world.