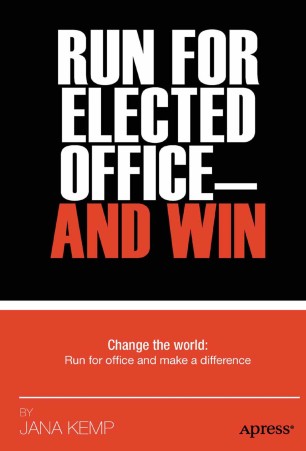 The list of challenges facing society is endless. Numerous financial and social problems affect the world and individual countries. And they also affect states, counties, cities, and even school districts and neighborhood policy councils. It’s time for fresh thinking and new ideas in the public arena; it’s time for more civic-minded people to get involved by running for—and winning—elected office.

Run for Elected Office—and Win shows you how. It is designed to help readers make a positive impact on the world and in the communities in which they live. It starts with how to make a decision to run for a particular office and ends with how to proceed with a successful political career—and it covers everything else in between. This book helps readers:

Jana M. Kemp entered public service for the first time in 2004, after being elected to the Idaho House of Representatives in District 16, which includes parts of Boise. During the 2010 election cycle, Kemp ran as an independent and was the only female candidate on the general election ballot for governor of the State of Idaho. She is also the founder of Meeting & Management Essentials, which focuses on improving meeting, time, and decision-management skills for individuals and organizations. Named one of the "Idaho Accomplished under 40" (years of age) business owners in 2001, Kemp also received Better Business Bureau's 1999 Integrity Counts small business award. She is the author of five books: Moving Meetings (McGraw Hill, 1994 and released in Italian in 1999), NO! How One Simple Word Can Transform Your Life (AMACOM, 2005 and translated into Polish, Turkish, Dutch, Arabic, and Chinese), Building Community in Buildings (Praeger, 2007), Moving Out of the Box (Praeger 2007 and a paperback edition by Stanford University Press in 2009), and Prepared Not Paranoid (Praeger 2008). Kemp has also served as a business columnist for the Idaho Press Tribune and the Idaho Business Review. She is the publisher of the quarterly online newsletter Better Meetings for Everyone. For four years, she originated and hosted the business-radio talk show Momentum, and she has also provided business segments on NBC's Boise Affiliate KTVB Channel 7's Sunrise Program.