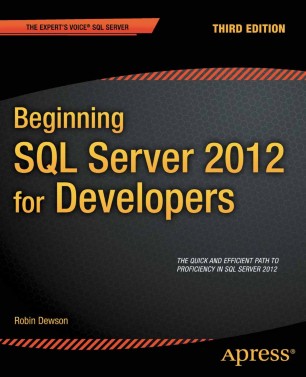 Beginning SQL Server 2012 for Developers is the perfect book for developers new to SQL Server and planning to create and deploy applications against Microsoft’s market-leading database system for the Windows platform. Now in its third edition, the book is enhanced to cover the very latest developments in SQL Server 2012.

Also new in the book is coverage of the no-cost Express Edition. Whether you have no knowledge of databases, or have knowledge of desktop databases such as Microsoft Access, or even come from another brand such as Oracle Database, Beginning SQL Server 2012 for Developers provides the insights to get up and running with SQL Server 2012.

Within the book, there are plenty of examples of tasks that developers routinely perform. You’ll learn to create tables and indexes, and best practices for securing your valuable data. You’ll learn design tradeoffs and find out how to make sound decisions resulting in scalable databases and maintainable code.

Beginning SQL Server 2012 for Developers takes you through the entire database development process, from installing the software to creating a database to writing the code to connect to that database and move data in and out. By the end of the book, you’ll be able to design and create solid and reliable database solutions using SQL Server 2012.

Robin Dewson has been hooked on programming ever since he bought his first computer, a Sinclair ZX80, in 1980. He has been working with SQL Server since version 6.5 and Visual Basic since version 5. Robin is a consultant mainly in the city of London, where he has been for nearly eight years. He also has been developing a rugby-related website as well as maintaining his own site at Fat-Belly.com.