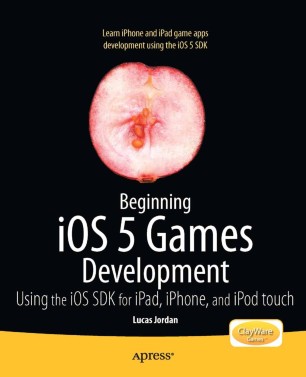 Using the iOS 5 SDK for iPad, iPhone, and iPod Touch

Game apps on iPhone and now iPad remain one of the most popular type of apps in the Apple iTunes App Store.  Does Angry Birds ring a bell?  What you were once able to do just for the iPhone (and iPod touch) is now possible for the popular iPad, using the new iOS 5 SDK.

Beginning iOS 5 Games Development provides a clear path for you to create games using the iOS 5 SDK platform for the iPad, iPhone, and iPad touch. You'll learn how to use classes to create game apps, including graphics, and animations. The latest version of Xcode will be used in parts of the book to guide you along the way of building your apps.

Other topics include iOS 5 game apps development with the newest iOS Game Center update, persisting user data, and designing a compelling user experience. After reading this book, you'll come away with the skills and techniques for building a game app, top to bottom, that could perhaps even be sold on the Apple iTunes App Store.

Lucas L. Jordan is a lifelong computer enthusiast and has worked for many years as a Java developer, focusing on user interface. He has previously written JavaFX Special Effects: Taking Java RIA to the Extreme with Animation, Multimedia, and Game Elements. Lucas is interested in mobile application development in its many forms.