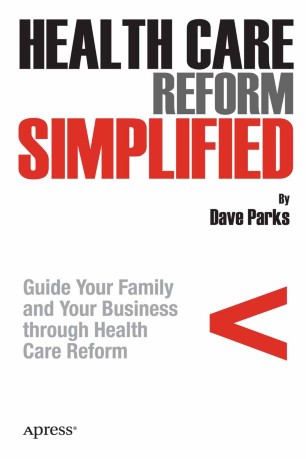 Guide Your Family and Your Business Through Health Care Reform

Health Care Reform Simplified describes the Patient Protection and Affordable Care Act of 2010. It translates the law’s complex language into terms that are easy to understand, explaining what the new law does, when its provisions take effect, and how to plan for individual, family, and business health coverage. This book outlines the financial impact of the law and how it affects businesses, insurers, hospitals, and doctors.

Most important, this book gives consumers and employers the critical information for making informed choices about new options for private and public health insurance coverage. It also describes how the law interacts with Medicare and Medicaid. Finally, it looks at the potential roadblocks—political and judicial, as well as economic—that may derail some of the provisions. But with nearly half the Act's provisions in force already, there is no time to lose in understanding how this legislation affects U.S. health care providers and consumers today.

Dave Parks has more than 25 years of experience as a journalist and has earned numerous awards for his coverage of some of the most important medical issues of our time. His investigative reporting about health problems found but ignored in veterans of the 1991 Persian Gulf War led to a White House investigation, Congressional hearings and changes in how the military medically screens troops before and after battle. He has written in-depth, groundbreaking stories about cancer survivorship, health disparities, cervical cancer prevention and liver transplantation. He has worked as an editor and writer in the Midwest and Southeast and traveled to some of the deepest reaches of Africa to cover the AIDS pandemic. He is a member of the Association of Health Care Journalists and American Medical Writers Association.