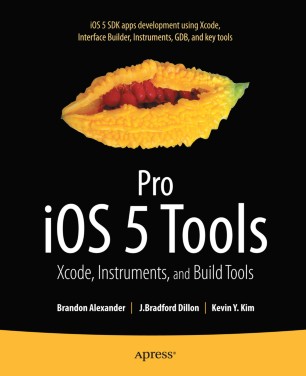 Building on your knowledge of how to write basic applications, Pro iOS 5 Tools: Xcode, Instruments and Build Tools shows how to take your apps from promising to real, and from good to great, by using numerous performance and debugging techniques and tools found in Xcode, Apple's Integrated Development Environment (IDE), Interface Builder and more.

You will start by studying an alpha-stage iOS app and learning how you can use the tools provided in the iOS developer's toolbox, plus popular third-party tools, to take an app to a final product and ready to ship. Your own app development will never be the same again!

Brandon Alexander is an iOS developer, writer and conference speaker living in Decatur, Georgia with his wife and daughter. Brandon began iOS deveolopment in 2008 and has spoken at several conferences. As a developer, Brandon enjoys making technology transparent to users and elegantly useful; as a speaker and writer, he loves teaching others about technology so that they can do the same. When he's not coding, writing or speaking at conferences, Brandon enjoys magic and photography.