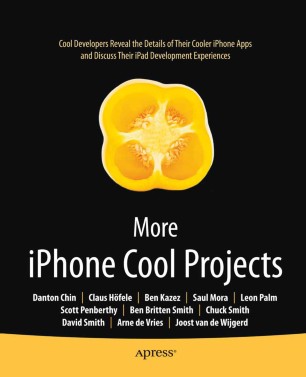 Everyone is developing iPhone applications, and it's clear why. The iPhone is the coolest mobile device available, and the App Store makes it simple to get an application out into the unstoppable iPhone app market. With hundreds of thousands of app developers entering the game, it's crucial to learn from those who have actually succeeded. This book shows you how some of the most innovative and creative iPhone application developers have developed cool, best-selling apps.

Not only does every successful application have a story, but behind every great app is excellent code. In this book, you'll see the code and learn how to use it to make your own cool applications. You'll learn everything from importing 3D art assets into your iPhone game to using Cocos2d for iPhone and iPad. This book shares the secrets of the coolest iPhone apps being built today by the best iPhone developers—invaluable knowledge for anyone who wants to create the app that everyone is talking about.

Ben Britten Smith has been writing software on Apple platforms for 15 years. Most notably, he was given an Academy Award for technical achievement for his feature film work with Mac-based suspended camera control systems. Lately, he has switched his efforts from the big screen to the small screen. His first iPhone game, SnowDude, was published to the App Store a few months after the software development kit became available. Since then, he has written a dozen apps for various clients, including the games Snowferno, the award winning Mole Quest for the Terracore Gem, and the Gamebook Adventures series. Ben lives in Melbourne, Australia with his wife, Leonie, and their pet bunnies.