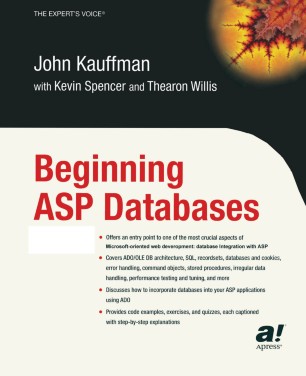 This book explains, demonstrates, and applies techniques that intersect with two great tools of the information age. The first tool, the database, is relatively old. On the other hand, the second tool, the Internet, is still quite young. And when you pair these tools—voilà! You can create powerful web pages.

With the help of Beginning ASP Databases, you will learn to incorporate databases into your ASP applications using ADO (which provides a set of objects that you can connect to, read from, and write to). You'll gain comfort installing necessary software handling stored procedures. And this book will answer many real-world questions, complete with code for you to copy and paste.

Kevin Spencer started programming in C in the early 1990s and wrote a number of shareware programs for DOS, most of which were door programs for BBSs. In the process, he learned to construct relational databases in C, and later worked with Microsoft Visual FoxPro and Access. As Internet database connectivity technologies began to emerge from Microsoft, he learned them as well. He then started his own business, Site Design by TAKempis, which specializes in Internet database application programming with ASP/ADO. Microsoft awarded him with the "Most Valuable Professional" award in 1997. He has written articles about Microsoft FrontPage and ASP/ADO for several online magazines, including ASP Today.