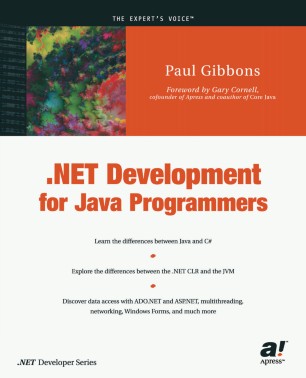 Java developers have adapted to a world in which everything is an object, resources are reclaimed by a garbage collector, and multiple inheritance is replaced by interfaces. All of these things have prepared developers to thrive in Microsoft's new .NET environment using C#.

Despite similarities between Java and C#, complex differences still lurk. This book will walk you through both language and library differences, to help you develop enterprise applications requiring mastery. You will then be able to build applications that communicate with databases and include network components, web pages, and many other features.

Early chapters highlight C#'s differences from Java, and discuss differences between the .NET CLR and JVM. Subsequent chapters cover various technologies in which J2EE development translates into .NET enterprise development. These middle chapters also explain .NET technologies that Java developers can begin using immediately. The final chapter examines migration of existing Java applications to C#, and the available tools and techniques. By the end of .NET Development for Java Programmers, a professional Java developer will be able to tackle a real software project in .NET, using C#.

Paul Gibbons works as a consultant for Volt Technical Resources. He has used many programming languages in more than 25 years of software development, but his current favorite is C#. Originally from Yorkshire, England, he now lives in Washington state with his wife and three children. In his spare time, he enjoys gardening and bird watching.