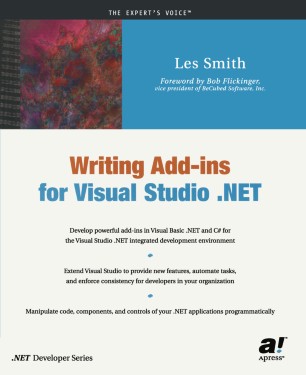 Visual Studio .NET is the most extensible development environment Microsoft has released to date. Organizations create add-ins for many purposes: to speed common tasks, to ease code reuse within an organization, and to enforce rules and consistency among developers. Effective use of add-ins can dramatically improve developer efficiency and reduce costs.

Smiths book begins by teaching readers how to use the Add-In Wizard to create the basic add-in framework. From there, he covers the manipulation of code in windows and controls, and the manipulation of projects. Writing Add-Ins for Visual Studio .NET explores in detail, how to create an add-in user interface, including toolbars, toolbar buttons, and multiple-level menus, as well as how to create a user interface in the system tray. Smith also addresses the migration of add-ins from VB 6.0 to VB .NET for those developers who have previous experience in writing add-ins.

One of the great challenges that add-in developers will encounter is finding the right classes from among the 3,400 classes in the .NET Framework. Smith teaches and demonstrates use of the Visual Studio add-in object model to show readers how to use the methods and properties and respond to events in order to enhance the power of the integrated development environment (IDE).

Les Smith is an independent consultant specializing in the development of Visual Basic .NET and ASP.NET applications. He is the president of HHI Software, Inc., and develops tools for developers using Visual Studio. He has been developing add-ins since the release of Visual Basic 4.0 and has been developing applications in Visual Basic for over 12 years. Prior to his PC development experience, which included the use of C and Clipper, he had 20 years of experience in the development of mainframe operating systems for a major mainframe manufacturer. Smith also managed several large development projects, both on mainframes and PCs.