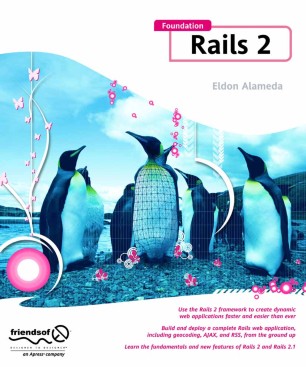 You've heard about this amazing web framework called Ruby on Rails that's taken the world by storm, but thought it was way too complex for you? Think again.

Foundation Rails 2 takes you through your first steps in Rails, explaining in plain English how to start building dynamic web applications. And there's never been a better time to jump in to the Rails world, as the release of Rails 2 was a major evolutionary leap forward from previous versions.

Unlike other Rails books, this book doesn't throw you into the deep end right away in the hopes that you'll learn to swim. Instead, we'll start out with the basics and continually expand your knowledge until, by the end of the book, we're building a Rails application with dynamic features such as user registration, geocoding, filtering results with AJAX, RSS feeds, and an XML interface. Meanwhile, we'll talk about the important issues that other books often leave out such as testing your application's code, securing your application from hackers, optimizing your code for the best performance, and of course, deploying your application.

This book takes a focused approach to guiding you through understanding how the pieces of Rails work individually and how they fit together. Instead of emphasizing boring theoretical discussions, Foundation Rails 2 lets you get your hands dirty with the framework and learn the hows and whys of Rails faster than ever.

We start with a tour of what makes Rails special and why you need to learn it, move into a gentle introduction to the high points of programming in Ruby, and then take a tour of a sample Rails application. Next, we dig deeper into the core components of Rails before building a complete Rails application together. By the end of this book, not only will you know how to build Rails applications but you'll understand the reasons behind what you do.