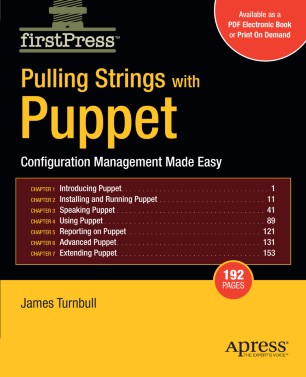 Competent system administrators know their success hinges upon being able to perform often tedious tasks with rigor and punctuality. Such metrics are often achieved only by instituting a considerable degree of automation, something that has become even more crucial as IT environments continue to scale both in terms of size and complexity. One of the most powerful system administration tools to be released is Puppet, a solution capable of automating nearly every aspect of a system administrator's job, from user management, to software installation, to even configuring server services such as FTP and LDAP.

Pulling Strings with Puppet: Configuration Management Made Easy is the first book to introduce the powerful Puppet system administration tool. Author James Turnbull will guide you through Puppet's key features, showing you how to install and configure the software, create automated Puppet tasks, known as recipes, and even create reporting solutions and extend Puppet further to your own needs. A bonus chapter is included covering the Facter library, which makes it a breeze to automate the retrieval of server configuration details such as IP and MAC addresses.

James Turnbull is the author of five technical books about open source software and a longtime member of the open source community. James authored the first and second books about Puppet, and works for Puppet Labs, running client services. James speaks regularly at conferences including OSCON, Linux.conf.au, FOSDEM, OpenSourceBridge, DevOpsDays and a number of others. He is a past president of Linux Australia, has run Linux.conf.au and serves on the program committee of Linux.conf.au and OSCON. James is Australian but currently lives in Portland, Oregon. His interests include cooking, wine, political theory, photojournalism, philosophy, and most recently the Portland Timbers association football team.