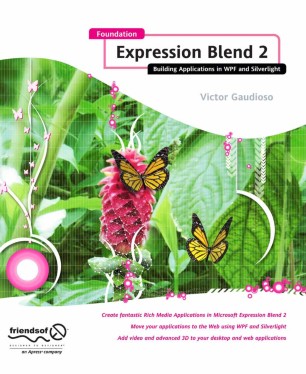 Building Applications in WPF and Silverlight

This book shows you how to take full advantage of Blend's interface, together with and Silverlight's vastly improved designer-developer workflow, guiding you through every step of development from downloading and installing of the development environment through creating finished, functional projects. You'll learn how to create simple drawing applications with the InkCanvas, make tabbed and scrollable interfaces, as well as build fully featured media players, photo galleries, and interactive 3D designs.

Each chapter discusses major WPF and Silverlight features, provides a hands-on tutorial, and explains how that feature is implemented in the real world. In the end, you will have a collection of impressive WPF and Silverlight applications that can be added to your portfolio.

Whether you're an experienced .NET or web developer, or you're just starting out, this book will provide you with all you need to create rich media applications with Expression Blend 2.

Victor Gaudioso is a senior application engineer at IdentityMine, a top-tier software company specializing in designing and developing cutting edge software applications, creating customized WPF/Blend and Silverlight training programs and creating tools for designers and developers. Victor has worked with Fortune 500 companies such as Microsoft, Harrah's, Mattel, NBC/Universal, Disney, Best Buy, GameStop, Vivendi Universal Games, and New Line Cinema, among others. Victor, a former Flash/ActionScript engineer, still stays active in the Flash community by writing articles and tutorials on ActionScript.org, where he is also a moderator.