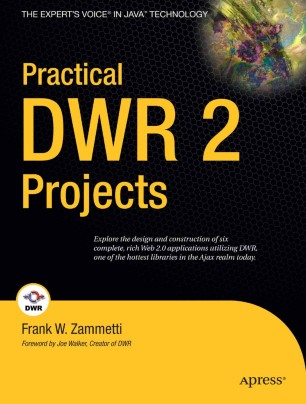 The Ajax craze is sweeping the world, and there is no shortage of libraries from which to choose to make it all easier to develop. One of those libraries has risen near the top in the Java space, and that library is DWR. DWR, or Direct Web Remoting, allows you to treat your Java classes running on the server as if they were local objects running in the browser, bringing the full power of your server–side business logic to the client without the usual problems that entails. In this book, you will:

In the end, you'll have a great feel for what DWR offers and how Ajax can bring the world of Web 2.0 to your doorstep, and you'll have a good time doing it.