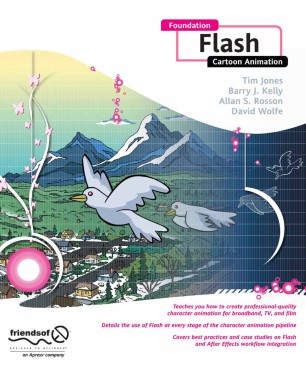 Whether you are an experienced Flash designer or developer looking for a guide to doing animation in Flash, or a novice to Flash who is looking for an effective way to create and distribute animations, this book will prove invaluable to you.

Covering every aspect of Flash animation, the book is a fast-paced yet thorough review of the Flash animation process. Written by the Emmy Award-winning team at ANIMAX, this book not only reveals the step-by-step process followed by one of today's leading Flash animation studios, but also give you valuable tips and tricks to take your Flash animation to the next level.

Divided into three phases of production (pre-production, animation, post-production) this book breaks the Flash animation process into smaller, more manageable steps. And because the authors approach the animation process from various perspectives (such as producer, animator, and editor) the book balances many of the real-world issues facing today's Flash animators, from artistic to technical to financial.

The book starts off by looking at planning and designing an animation project, including working out your goals, and putting together character libraries and storyboards. Next up we look at the production phase, which includes using plug-ins to make your work more efficient, implementing your animation, and adding special effects. Finally, we look at post-production work, including how After Effects can be used effectively alongside Flash for tasks such as camera mechanics, how to make Flash not look like Flash, and tips and tricks from the experts.

Whatever the reason, like millions of others around the world you've become interested in Flash animation. And you've come to the right place to learn more. This book is compatible with pretty much any fairly recent version of Flash.